My Life in Books - The Oxford Book of Famous People 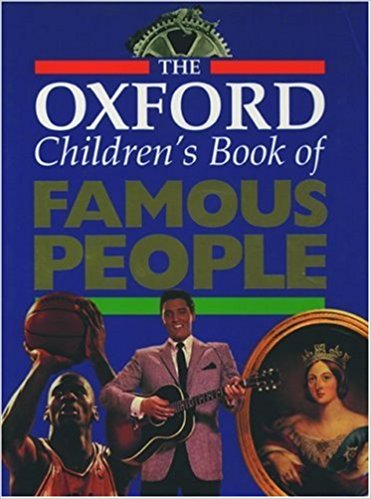 The Oxford Children’s Book of Famous People was published in 1994 by the OXFORD UNIVERSITY PRESS. My eighth birthday was in October of that year and it must have been given to me as a present at about that time. I had lots of books of facts as a child. They were the sort of thing I read cover-to-cover, sitting cross-legged on my bed. My desire for knowledge was pretty much insatiable. I eventually gave most of the books away to charity shops, but this one I kept, partly as a piece of nostalgia to represent all my World Record and Top Ten books, but also because of the memories that come with it.

My dad worked long hours when I was a kid. He was around at weekends but he was out from breakfast to bedtime during the week, so Monday to Friday I didn’t get to spend a lot of time with him. He would always come in to say goodnight when he got home however, and sometimes we would get this book down afterwards and look at it together. I would pick a random page and read out a name from it and Dad would tell me who they were. I’m sure he knew who a lot of them were – my dad’s a smart man – but there were plenty he’d never heard of and these were the ones I liked best of all. If I read a name he didn’t know, he’d make something up – usually something very silly to make me laugh. Thus a German chemist might become a world-famous dry-cleaner, an 18th-century social reformer might be the inventor of the mop, or a 19th-century Austrian politician might be a deep-sea diver.

I love this book because it reminds me of the power of knowledge, the wonder of discovery and the joy of having the whole world stretching out before you as a child. It also inspires me to instil in my boys that same sense of curiosity about the world we live in and the people who populate it.

[This image is from Amazon. I did take a picture of my own copy, but due to my technical inability to get it to appear the right way up on this website it is useless!]